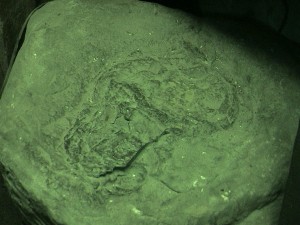 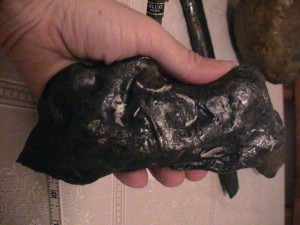 I met with Mr. Ed Conrad, a man who has spent his entire life exploring a coal seam near his home in Shenandoah, Pennsylvania. My dad lived in Shenandoah as a teenager when my grandfather was a Methodist Minister there. I was familiar with the region and was excited to meet Mr. Conrad.  Geologists believe the coal seams near Shenandoah are 22o millions years old.

Well something might not be right with that estimate, because Conrad found human remains under the coal. Ripped apart human organs and a fetus all somehow encapsulated in molten rock. I viewed Mr. Conrad’s scans he had taken at a local hospital of various specimens showing organs trapped inside solid rock. How could this be real?

Setting aside the usual “It’s a hoax !!” theory and instead actually thinking about the evidence like we are supposed to, I thought of this scenario:

What if in 13,000 BCE, a series of meteorites struck the earth in a long chain, rocking the earth off its axis, and causing it to tilt 25 degrees? Then the sudden movement causes the crust to move with the heavier mantle following at a slower pace. Friction between the crust and mantle unleash massive volcanic eruptions under the old ice cap centered over southern Greenland.

The volcanic eruptions instantly melt the lower third of the ice cap. Pressure from the surviving two thirds of the ice cap above, forces the super steam to shoot south across New York State down into Pennsylvania (and the rest of the North American Continent). The steam is traveling at super hurricane speed. It rips apart any living creature in its path. People lived in Pennsylvania in 13,000 BCE. Those in the path of the steam are shredded. Lava encapsulates the bodies and a second later ice super freezes the lava to solid.

Here is another idea: Same meteorites striking the Northern Hemisphere causing a tilting of the Earth. The sudden shift of the axis unleashes a super wind that blows across the continent, shredding people and animals and leveling forests, similar to what happened to ice age fossils found in Alaska and off the pacific coast of Russia. The volcanos erupt under the ice cap and the continent where conditions favor their formation.  Ash falls on the body parts, insulating them from the coming torrent of  lava, steam, ice, and sea water sweeping down from the catastrophically melting ice cap. The body parts are entombed in rapidly formed nodules of granite, possibly explaining the rounded shapes of the pieces I examined at Conrad’s home.

Here are all the photographs I took during my visit at Conrad’s home:

Here are some updates on Conrad’s work taken from links by others who have been following his research.  I can’t vouch for the theories the other sites are posting.  I am only responsible for my own thoughts. Mine are crazy enough I guess :

One of my photos of the stone skull pictured in Mr. Conrad’s webpage.  The specimen smelled like moldy boot leather. I photographed the teeth in the PDF. I am pointing to one in the PDF slide. 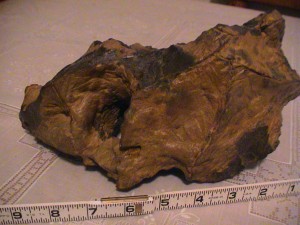