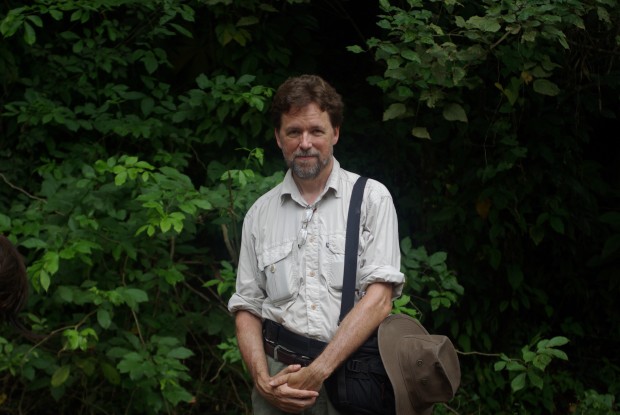 Jack Althouse is a national award-winning architect with thirty years of experience. He is the principal owner of a eight member architectural firm that serves clients across eighteen states and other countries. His day job fuels his passion to study and explore ancient architecture and uncover world-wide evidence of pre-Columbian contact between far flung ancient cultures. Over the last twenty-two years, Jack has explored twenty-nine countries over four continents, from Peru to Russia. He’s visited many multiple times and lived in some locations for extended periods.

During a trip to Egypt in October 2008, he was invited to study the pyramids of Giza and was given access to off-limits areas of other sites. He presented his research on the possible existence of a buried vault beneath the Khafre Pyramid to the Director of the Giza Pyramids and later to the Supreme Council of Antiquities. The Direct Secretary to Dr. Zawi Hawass interviewed him at length on his knowledge of a buried chamber and shaft anomaly that they had found and had not yet publicized. Their discovery of the shaft leading to an underground chamber west of Sakkara was officially announced three weeks later.

Jack maintains that the Sakkara shaft/chamber is a smaller version of a much larger, more significant chamber waiting to be discovered beneath the Khafre Pyramid, the middle pyramid of the three Giza Pyramids.  Egyptians appear to agree on the chamber’s existence but disagree on which pyramid hides the chamber’s nine hundred-foot access shaft. Jack has received emails from Dr. Hawass, inviting him to return to Egypt for further discussions with the Council.

George Erikson, author of Atlantis in America, is a colleague and mentor. He was the first to embrace the discovery Jack made between a Nazca carving called El Candelabra in Peru pointing to the Giza pyramids and describing a twelve-story chamber hidden beneath the middle pyramid. George invited Jack to explore with him and assist in collecting material for his own work. They traveled throughout Central America on two extended expeditions in 2001 and 2005, visiting remote Mayan ruins in Mexico, Belize, and Guatemala.  Together, they hacked their way through jungles and sugar cane fields, exploring undeveloped pyramid sites, looking for evidence of early European, African, and Asian cultural contact with Mayan, Olmec, Toltec, and Aztec cultures. Many important discoveries were made. Jack discovered that ancient sites in the Americas and Europe have a common compass orientation that crisscrosses over the ancient location of the magnetic north pole in 11,000 BCE, before it was suddenly shifted twenty-two degrees.

George used Jack’s research along with his own in film documentaries that aired on the Discovery Channel and National Geographic. George’s “In Search of Atlantis” series reflects his appreciation for Jack’s reinterpretation of the Atlantis story as shaped by a more literal reading of Plato’s Critias and a global look at geological, architectural, and historical evidence. Jack has pieced together evidence suggesting that Atlantis was an empire of enormous size. According to Plato, Atlantis was a ten nation empire that covered many island groups and two continents the size of Asia and the northern portion of Africa (Ancient Libya). North and South America match this land mass parameter. The empire may have stretched from Canada to Antarctica—when Antarctica was ice free—and from Micronesia to Western Europe. The capital of Atlantis, Poseidon, was the largest city to ever exist, larger than Pennsylvania, New Jersey, and Delaware combined. It accessed the Atlantic via a canal over a thousand miles long. Close scrutiny of the Western Caribbean shows that all of Poseidon and its canal could have fit perfectly in the basin, an area that was above sea level until 11,000 years ago, when the world’s oceans catastrophically rose almost eight hundred feet. Recent side sonar scans off the southwest coast of Cuba show geometrical features protruding from the sandy floor. They appear to be streets lined with pyramid structures.

Jack believes Poseidon sank into the western Caribbean at the catastrophic end of the Second Age, approximately 11,000 BCE.  Evidence in myth, history, architecture, sculpture, astronomy, and geology point to a celestial event triggered by a multiple meteorite strike near the Hudson Bay, jarring the Earth off its axis twenty-two degrees and knocking the Equator out of alignment with the twelve constellations of the Zodiac.  If true, then the crust of the Earth would have shifted, but the atmosphere, oceans, and magma core would have been slow to follow. The entire earth would have convulsed with massive tidal waves, earthquakes, super hurricanes, and multiple volcanic eruptions. Jack believes that while the capital drowned beneath the invading ocean, the rest of Atlantis was either buried, scorched, drowned, or frozen under three hundred to a thousand feet of ash, mud, magma, or ocean. His novels are based on his twenty-two years of library, museum, and field research of this horrific event that he believes exterminated seventy percent of the world’s plant and animal population and decimated the human population.  Several branches of the human species may have been exterminated.. The “Hobbit people” of Tulum, Mexico and the giant races depicted in architecture and art around the world could be examples of these mythical races.

Interest seems to be growing in Jack’s practical theory that the ancient world has experienced repeated global catastrophes and that the ancients built pyramids as a means to survive their sudden re-occurrence. He believes that the abundant flat-topped pyramids around the world may have been constructed as easily-reached, higher-ground shelters to provide quick escape from tidal waves, earthquakes, and meteor strikes, and he’s finding receptive audiences, for his presentations, in churches and schools.

Jack and his wife have been happily married for thirty two insane years. They have five children, two who were adopted from Russia.  Jack and his wife are involved in many Christian organizations. They take turns volunteering for short-term overseas missions work. Their shared passion is to reach out to the poorest peoples of the world, especially orphans. One of Jack’s dreams is to use proceeds from a writing career while keeping active in his architectural profession. He hopes to fund current humanitarian projects he is personally involved with, including the construction of an orphanage in Egypt, a school project in Peru, and a hospital project in Haiti.

A portion of the author’s proceeds will be donated to The Mission Society.