Here is a visual model of how I think the Sun may have been birthed during the slow death of a Primary Star.

The Sun is a Secondary Star, meaning it came from a Primary. 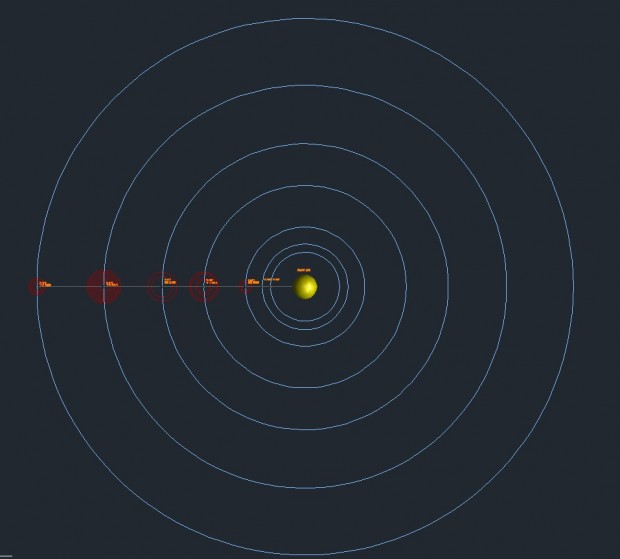 There are planets orbiting the Primary Star. The red rings are the orbits of moons orbiting some of the planets.

Sometime in the distant past a Primary Star died. Maybe it died peacefully without a huge bang. Material could have leaked into the surrounding system by shooting out the poles. 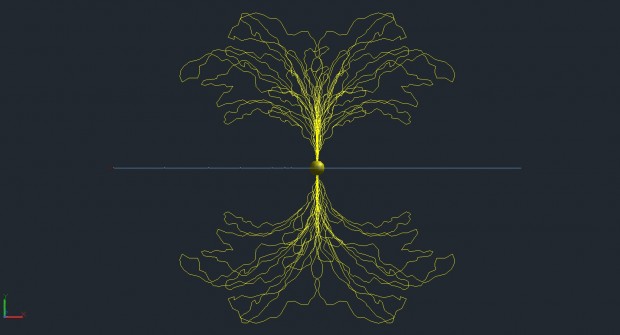 As the Primary Star expelled material into the surrounding system, its mass could have shrunk. 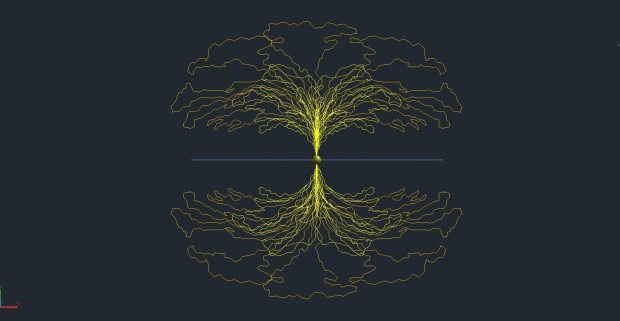 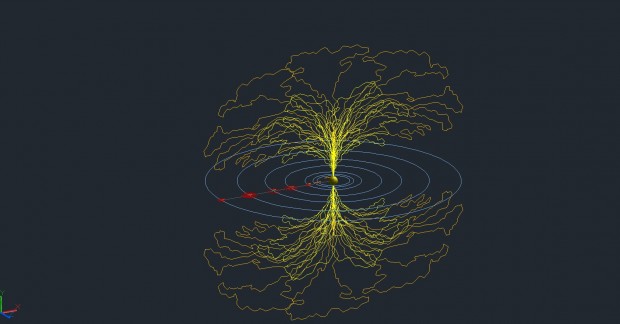 As the Primary Star died, the material formed a gaseous sphere around the entire system. 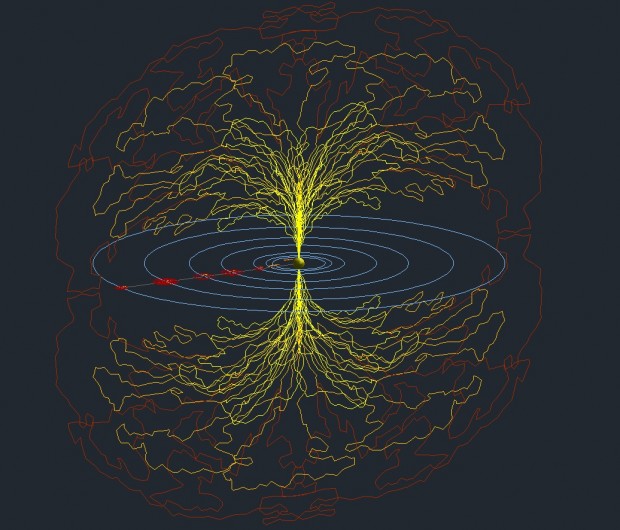 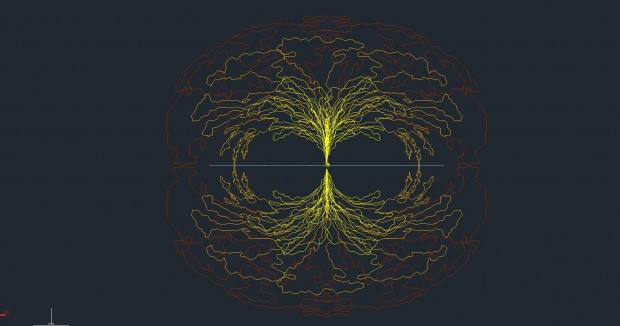 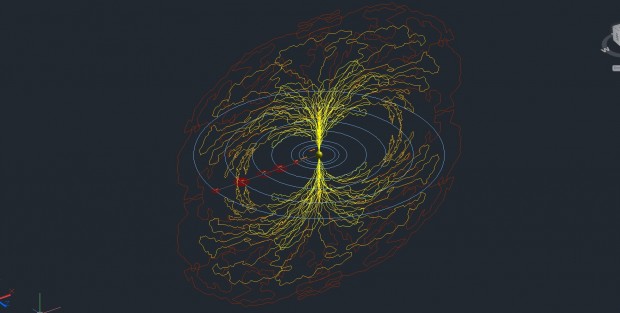 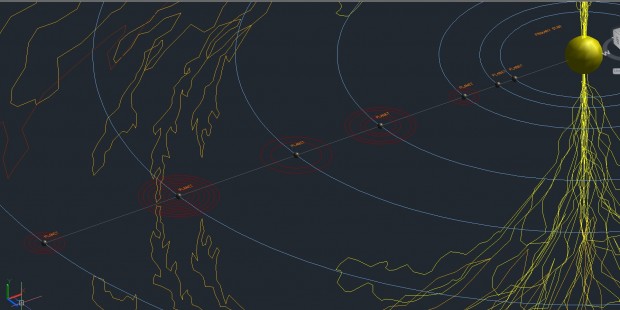 In the movie 2010 Odyssey Two, Arthur C. Clark theorized about the planet Jupiter being turned into a sun by collapsing its mass and igniting the fusion process. From what I have read, it would take 75 to 85 jupiters to be large enough to collapse and trigger the birth of a star.  What if such a process happened in this Primary Star system? What if the slow death of a parent star, raining material on its planetary system, could provide the material necessary to turn a large planet into a Secondary Star? 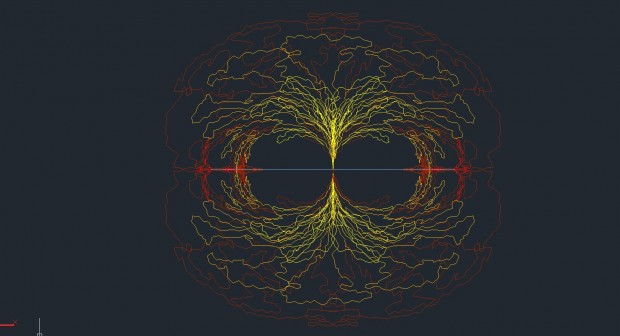 True or not, it does make for some cool visuals. 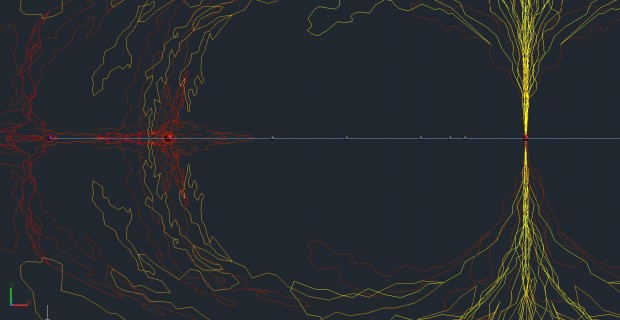 Here I show the material from the mortally crippled Primary Star being pulled into the outer planets and beginning the process of igniting a planet. 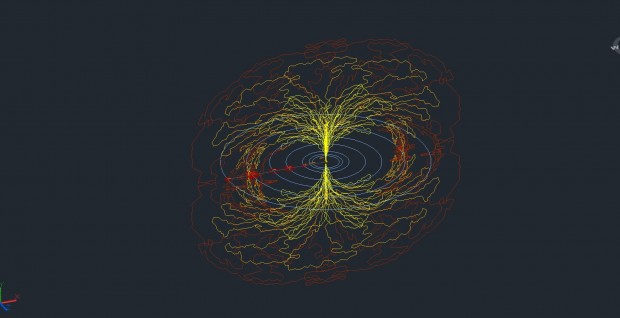 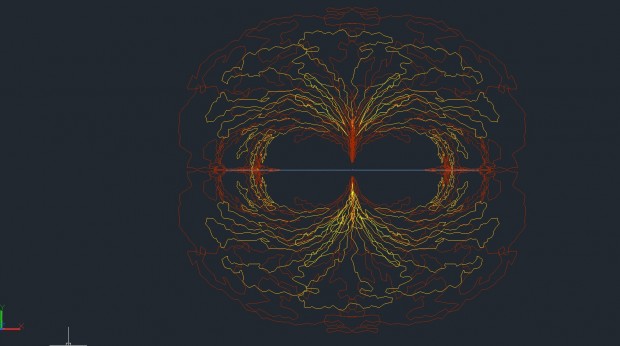 The Primary Star extinguishes and the planet ignites. The cooling Primary Star is in the upper right corner of the image below. The igniting Secondary Star is the yellow globe directly below. 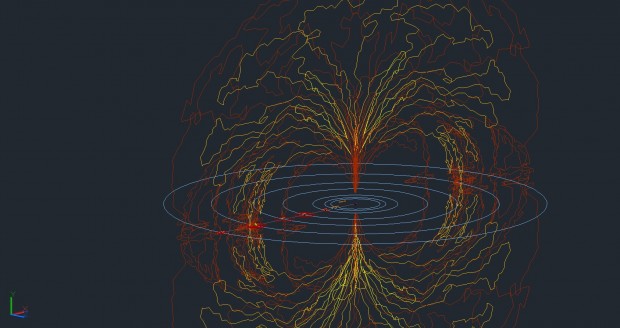 Death of the Primary Star, fading of the expelled gases, and the awakening of a new Secondary Star. 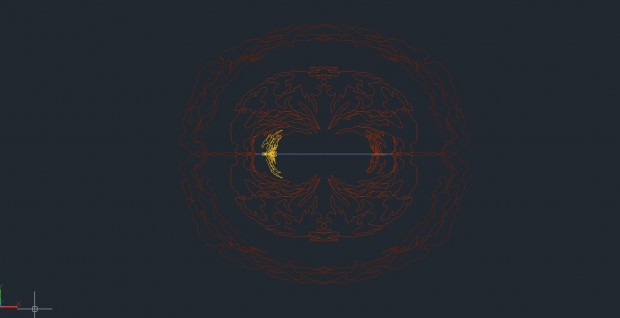 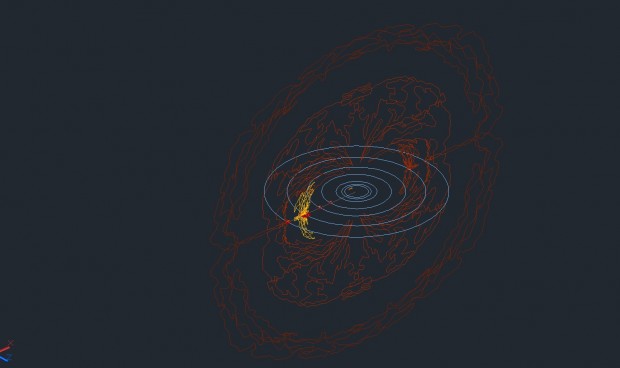 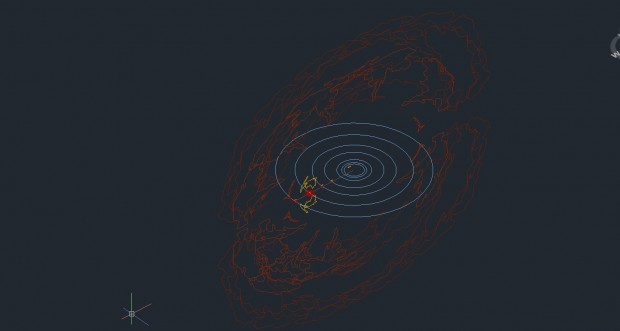 I had a problem with the Genesis Creation story because it starts with the Earth and then later there is light from the Sun.

How could the Earth exist before the Sun was made?

The death of a Primary Star forming a Secondary Star (Sun) out of a giant planet and changing its moon (Earth) into a planet, fits the sequence of the Genesis Creation story.

I printed the Genesis Creation story at the end of this post.

Notice that the earth exists before the Sun is ignited. Notice also that two lights exist in the sky (at the end of the passage).

I thought that the second light was the Moon. What if it wasn’t?

What if the second light was the remains of the dead Primary Star, glowing like a ember in the sky, slowly fading until it finally went dark sometime during human history?

There are ancient stories of a Wizard’s Star that regularly “passed by” the earth, causing destructive earthquakes and killing the mammoths in the Americas. Could the Wizard’s star be the dead Primary Star still glowing in the sky long after it died ?

Is it possible that long ago a Primary Star died, spread its remains on its planets, and ignited one of the planets into a Secondary Star?

Could the Sun be a transformed planet of an undiscovered dead star hiding in the shadows our solar system?

Did that transformed planet have orbiting moons that survived the ignition process and became the eight planets of our Solar System?

1 In the beginning God created the heavens and the earth. 2 Now the earth was formless and empty, darkness was over the surface of the deep, and the Spirit of God was hovering over the waters.

6 And God said, “Let there be a vault between the waters to separate water from water.” 7 So God made the vault and separated the water under the vault from the water above it. And it was so. 8 God called the vault “sky.” And there was evening, and there was morning—the second day.

9 And God said, “Let the water under the sky be gathered to one place, and let dry ground appear.” And it was so. 10 God called the dry ground “land,” and the gathered waters he called “seas.” And God saw that it was good.