This shows world as it may have looked around 13000 BC. The countries are actual names of countries listed in Plato’s Critius. ( P 388, Works of Plato, Jowett Translation, Tudor Publishing Company, New York, New York )  and in the writings of Josephus ( Starting page 57, The Complete Works of Josephus, William Whiston, Kregel Publications, Grand Rapids, Michigan, 1999 )

The orange line shows the route Jordan took in the first two books of the series. Second Sight ends in Tevleh (I chose the name Tevleh by writing the old name for Switzerland backwards : Helvet) Second Birth picks up the trail from there and takes you into Mestre and Javan (Athen) I hope this helps you visualize the stories. 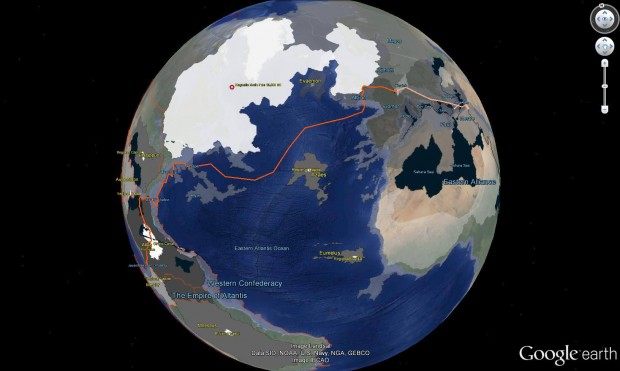 Western Hemisphere showing the ten nations of Atlantis. Note that three nations are islands in the Eastern Atlantic. Also two nations are located on Antarctica, which was ice free and had a temperate climate during this time period. 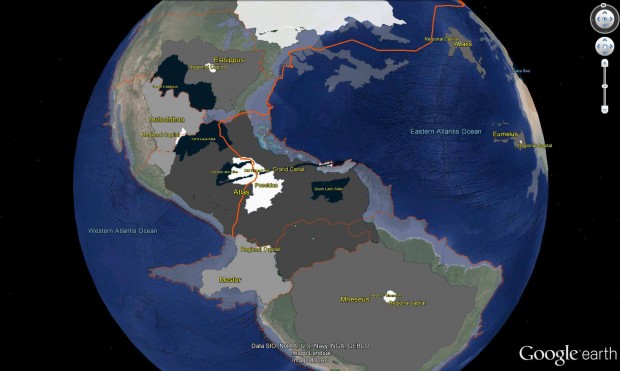 I made the land masses transparent so you could compare them to the modern day coastlines.

Jordan “lands” in the middle of the Javan / Mestrean Embassy. I placed the Embassy on the old western coast of Central America.

In modern times this coastline is submerged underwater due to rising sea levels.  That is why Jordan lands in water at the end of Second Birth. 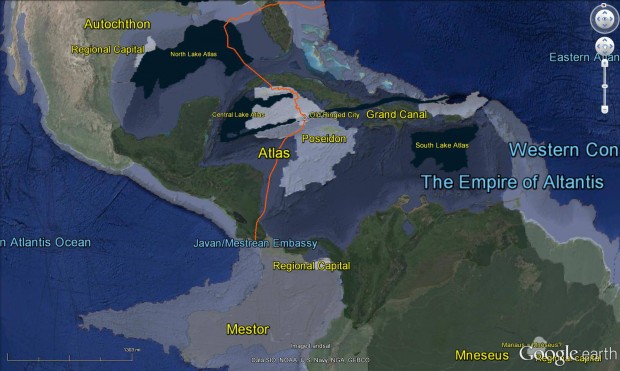 In Second Sight Jordan is taken to the Imperial Capitol of the Atlantean Empire. Plato called it Poseidon. I called it Payahdon to suggest the other names it was remembered by in other cultures:  Valhalla, Avalon, etc.  From there Levi and Aaron evacuate Jordan, Suri, Amon, Diago, and Ambassador Numu north across a lake in the middle of the valley that later becomes the Gulf of Mexico. They turn east across the land mass comprising future Florida and the Bahamas. Baskra Harbor is an actual submerged harbor several hundred miles off the coast of Jacksonville, Florida. I modeled the story action around the submerged features of the harbor. They sail north along the Continental Shelf which was an actual coastline 13000 years ago. I had to delete the chapters about the group landing on the Algon Peninsula in order to keep the novel’s length manageable. The peninsula  extended from New York southeast into the Atlantic and reached as far as Bermuda. This peninsula was apparently made of limestone, chalk, or other similar sediment, and dissolved as the ocean level rose.

The submarine route around the southern edge of the old polar ice cap. The group lands on the coast region between France and England. This area also disappeared and became the English Channel. 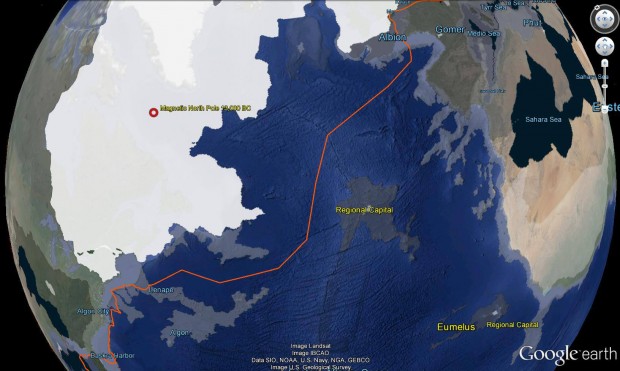 Mer is located under Stonehenge.  The lighter orange route is the route taken by Jordan during Second Birth up until he reaches Javan.

I wanted to spend a lot of time in Javan and Mestre. I am fascinated with the fact that the Mediterranean was a valley in 13,000 BC.  According to NASA the Nile was a one mile high waterfall that plunged into this valley.  I hope you enjoy the experience. I tried to make it as true to the geological theory as possible. 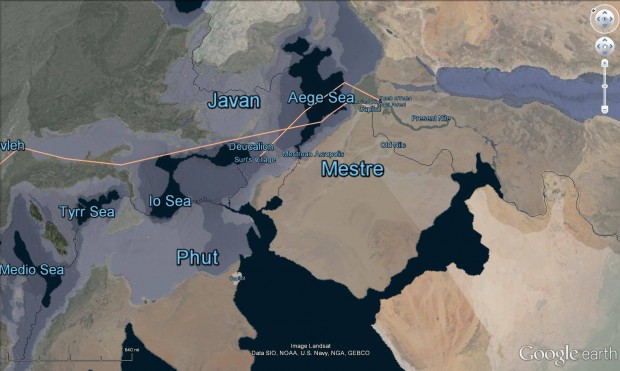